Girl From The North Country review

The Girl From the North Country

The Noël Coward Theatre in London until March 24th, 2018

In a show developed at the Old Vic and then transferred to the Noël Coward Theatre, the Irish playwright Conor McPherson has miraculously mingled a new play with the songs of Bob Dylan; The Girl of the North Country is a play within a musical, or a musical within a play, take your pick. This is a wonderfully creative way of working with songs as source material, even though it is not always easy to see the cryptic connections between the play and the music. Of course, the Bob Dylan canon is fertile ground for anyone’s imagination, but McPherson’s setting of The Girl of the North Country in the 30’s Depression era is a brillant conceit and his illustrious cast of West End insiders and outsiders is exquisitely beautiful to watch and to listen to.

There are many outstanding performances, but I will cite the phenomenal Sheila Atim as the inspiration of the evening; it is absolutely no wonder that she’s nominated for an Olivier award for her extraordinary rendition of Marianne Laine, the daughter of Nick and Elisabeth (played by fellow Olivier award nominees Ciarán Hinds and Shirley Henderson) and the sister of Gene (Sam Reid).

The family runs a two-bit hotel in Duluth, Minnesota that hosts a straggling, struggling cohort of guests and neighbours with different destinations and destinies. The songs weave in and out of the play, with fascinating resonances and reflections of the mystical and sometimes obscure music of Dylan. The story lines are often hard to follow, it’s like reading his autobiography “The Chronicals Vol. 1” where fact and fiction are constantly changing hands like poker players in a card game.

The songs that McPherson has chosen are not always the best known in the Dylan catalogue, yet another way that the author keeps you off balance, you never know what to expect next. Highlites include “License to Kill”, “Hurricane”, “True Love Tends To Forget” and “I Want You”, but the spine tingling effect of Sheila Atim’s velvet voice singing “Tight Connection To My Heart (Has Anyone Seen My Love?)” brings tears to the eyes: the true beauty of great artistry! The cast of Girl From The North Country is incomparable; a unique and inspiring troupe that brings to life such beautifully written characters and songs. When they raise their voices together at the end of the show to sing the Dylan classic “Forever Young”, I was hoping for a big finish that would bring me to my feet. But McPherson has chosen to cut short this magnificent song and leave the audience somewhat dazed and confused, and leaving me wishing that this night might have gone on and on… 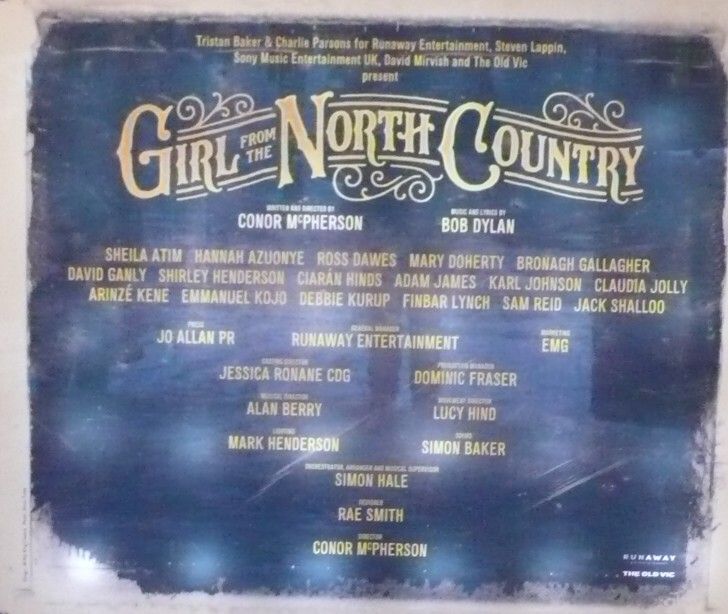